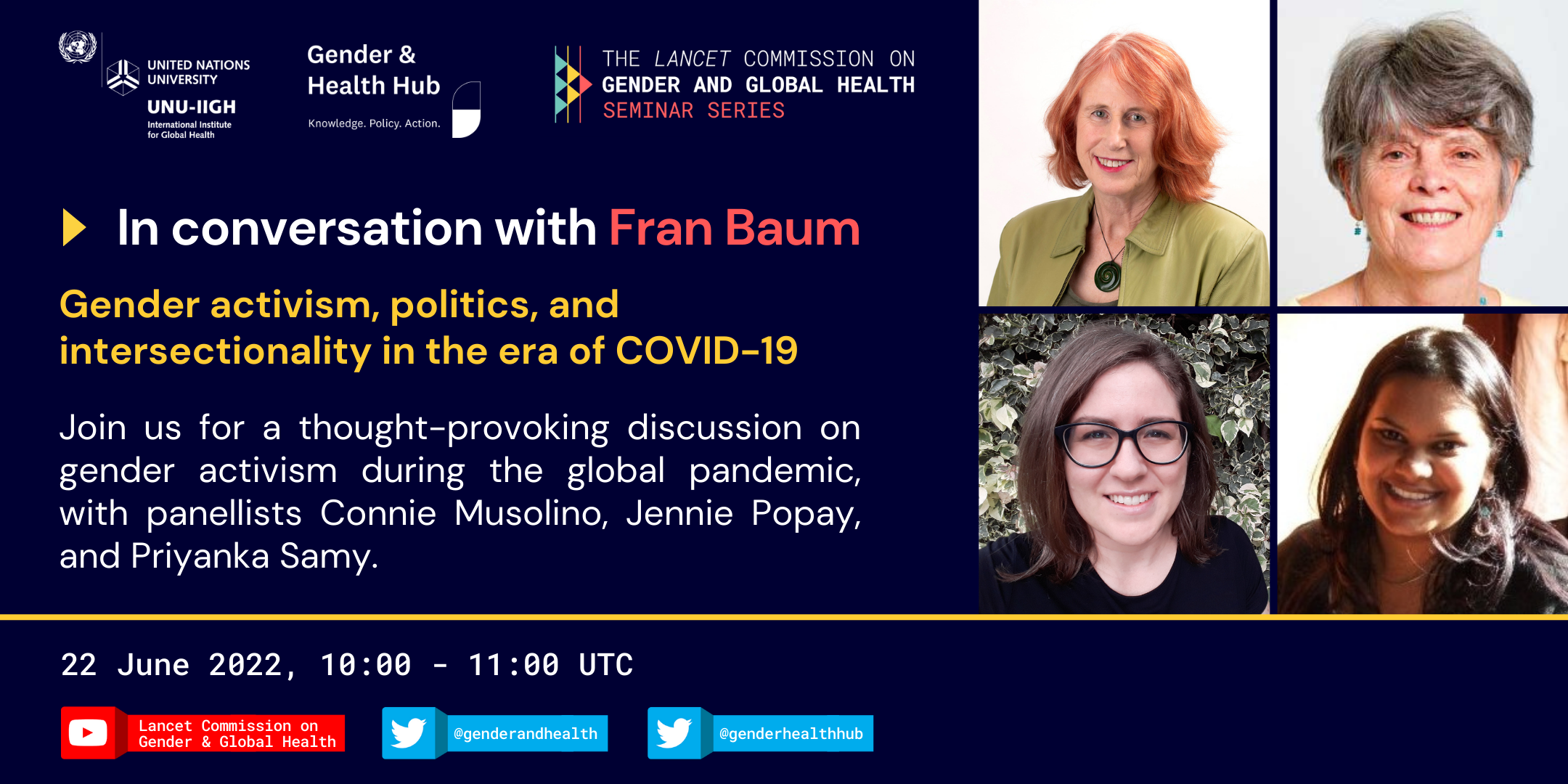 In Conversation With, the Lancet Commission on Gender and Global Health’s seminar series, returned with a fourth episode on June 22nd. In Gender activism, politics, and intersectionality in the era of COVID-19, Commissioner Fran Baum examined the intersectional inequities exacerbated by the pandemic and invited colleagues to share their insights from studying the structural violence experienced by many throughout the pandemic. Baum, Professor of Health Equity and NHMRC Investigator Fellow at University of Adelaide’s Stretton Institute, was joined by three colleagues:

This webinar was co-convened with UNU-IIGH and the Gender & Health Hub. Commissioner Baum and speakers were joined by fellow Commissioners and livestream audiences on Zoom and Twitter. A recording of the hour-long webinar is publicly available on the Commission’s YouTube channel.

Baum began the session with an overview of the many inequities that predated the pandemic but were undeniably worsened by COVID-19, with compounding factors such as gender, class, caste, race, disability, and sexuality. She identified structural violence as the overarching theme of pandemic response, evident in the “massive vaccine inequity” seen around the world. At the time of her comments, for instance, only 13% of Nigeria’s population had received a single dose of any vaccine, compared to the vaccination rates of high-income countries which tend to hover between 80-90%>. Even within those countries however, she noted that “the picture would be very different” if these rates were broken down to focus on people with disabilities, people of different sexualities, and other marginalised populations. 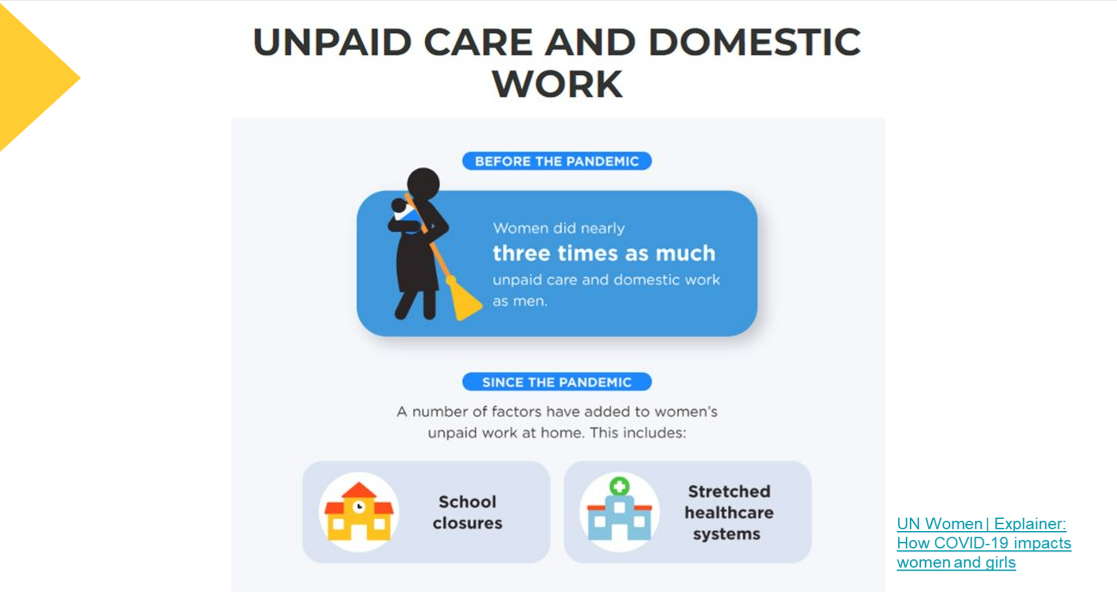 Beyond vaccines, the pandemic has generated gendered impacts that have disproportionately affected women and girls. Baum touched on women’s involvement in front line occupations, increased risks of experiencing violence during lockdown, additional burden of navigating care and work duties at home, and findings which suggest that women have been more affected by pandemic-related job losses and employment insecurity. Trans and gender diverse individuals have also faced gendered impacts in their experiences of the pandemic, with “the normal structural systemic inequities… [becoming] more pronounced”.

To shed light on these experiences of the pandemic, Baum swiftly moved into the panel discussion, which focused on better understanding some of the challenges that emerged during the pandemic through an intersectional lens.

Between the three of them, the panellists brought to the discussion insights from an examination of COVID-19 experiences in 17 case study countries, experiences of community engagement with Dalit and Adivasi women, and compelling arguments for the importance of narrative.

Musolino began with a focus on gender divisions in the care economy which emerged as a consistent theme across the 17 case study countries she recently analysed with colleagues at Stretton Health Equity. With women making up approximately 70% of the global health and social care workforce, the burden of care during the pandemic fell primarily on women shouldering paid and unpaid care responsibilities. The intersection of gender with class, caste, race, and more exacerbated the impacts of this burden for many, such as women of colour in the United States who were disproportionately represented in jobs which were deemed essential and necessitated continued work outside of the home even during the worst waves of COVID-19. Women employed in low-paid and precarious roles as caregivers for the elderly faced “some of the most deadly outbreaks”, but the informal nature of their employment often “meant that workers did not have access to paid sick leave and other entitlements, further increasing the risk of illness and spread”. 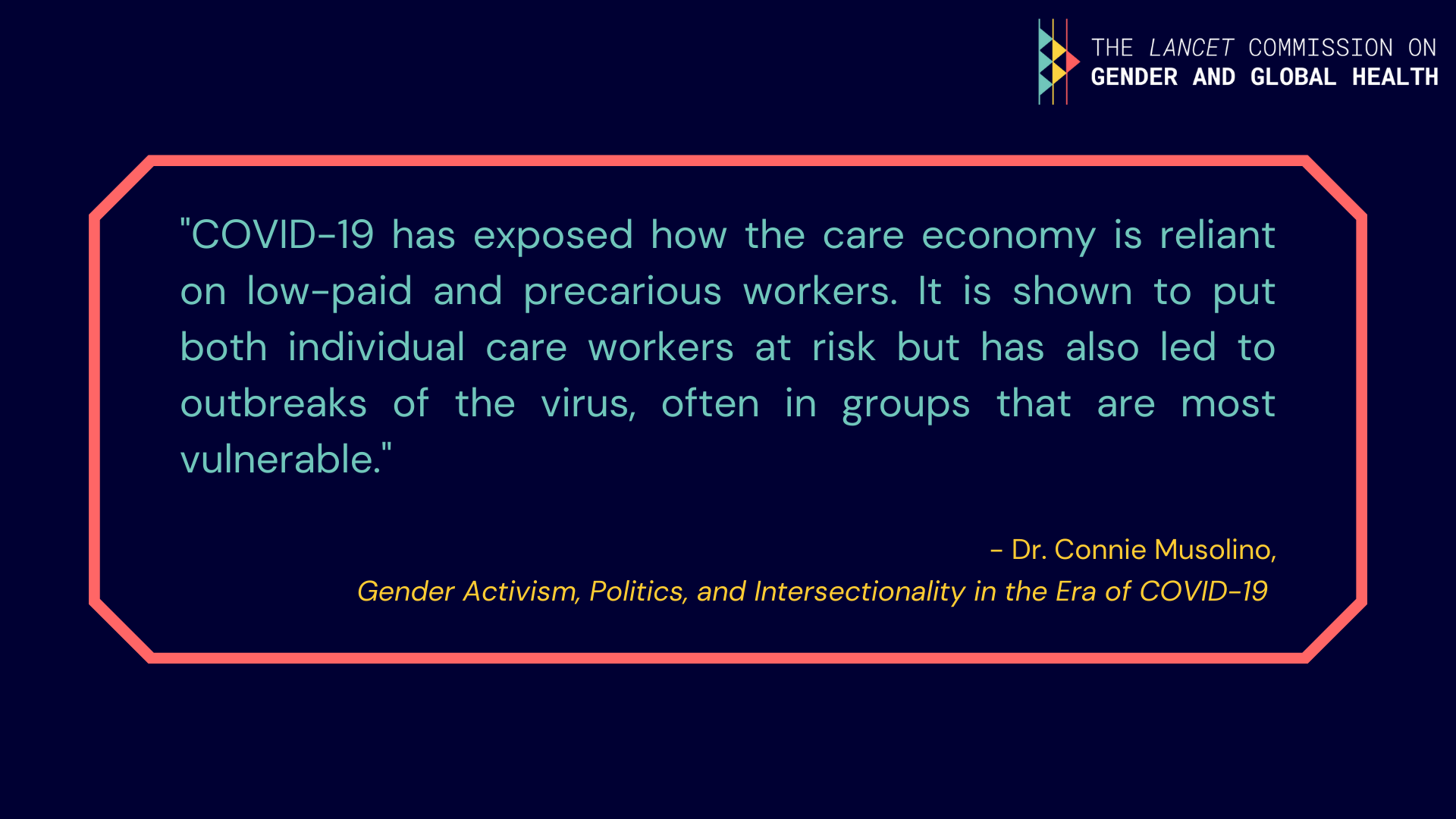 Utilising a political economy perspective, Musolino argued that “the COVID-19 pandemic is intrinsically linked to local and global economic and political histories”, with the legacies of colonisation, slavery, and patriarchy evident in the continued exploitation of care worker in countries “which often rely on and exploit groups in poorer neighbouring countries” as evidenced by the example of Peru’s treatment of Venezuelan migrants informally contracted to be maids and carers. Migrant and undocumented workers, both in the care economy and outside of it, often have little to no access to social security or rights, are more vulnerable to exploitation and abuse, and face harsher public health measures than the majority of other workers as seen in the case of long-term residential aged care workers in Singapore. However, in the latter example, Musolino also highlighted how swift measures were put in place by the Singaporean government to support care workers once the virus began to spread in aged care facilities.

Civil society activism tends to play a role in such stories of good practices, with Musolino crediting civil society not just for playing a role in political decision-making but also engaging in public discourse to raise awareness, fact-check misinformation, combat fear and stigma, and amplify the voices of marginalised groups by “pushing back against the politicisation of such identities during the pandemic”. However, different actors within the wider umbrella of civil society also feature prominently in cases of bad practices, such as anti-vaccination movements which have “lobbied governments and industry bodies to influence such things as withdrawal of mask mandates”.

Ultimately however, Musolino emphasised the importance of civil society activism as a force for good, highlighting the role South African and Indian civil society groups played in ensuring access to vaccinations and “engaging in broader issues around politics and power… to highlight intersections of oppression during COVID-19”.

Samy drew on her experience working with the National Federation of Dalit Women to speak on the role of civil society in the Indian context, and emphasised the influence of India’s caste system – “the longest surviving social hierarchy” – in individual experiences of the pandemic. She identified Dalit and Adivasi (tribal) women as “being at the lowest rung of the caste and gender hierarchies”, thus bearing the brunt of the exacerbated inequalities brought forth by COVID-19. The country-wide lockdown announced by the government in the early days of the pandemic had immediate effects on these marginalised groups, with Samy estimating that 90% of the internal migrants who lost their livelihoods and shelter overnight as a result of the lockdown belonged to Dalit and Adivasi communities. With no assurance of food or transport from the government, Samy recalled how “thousands of families – women, children, babies – walked back [to their villages] with several people dying of starvation en route”. 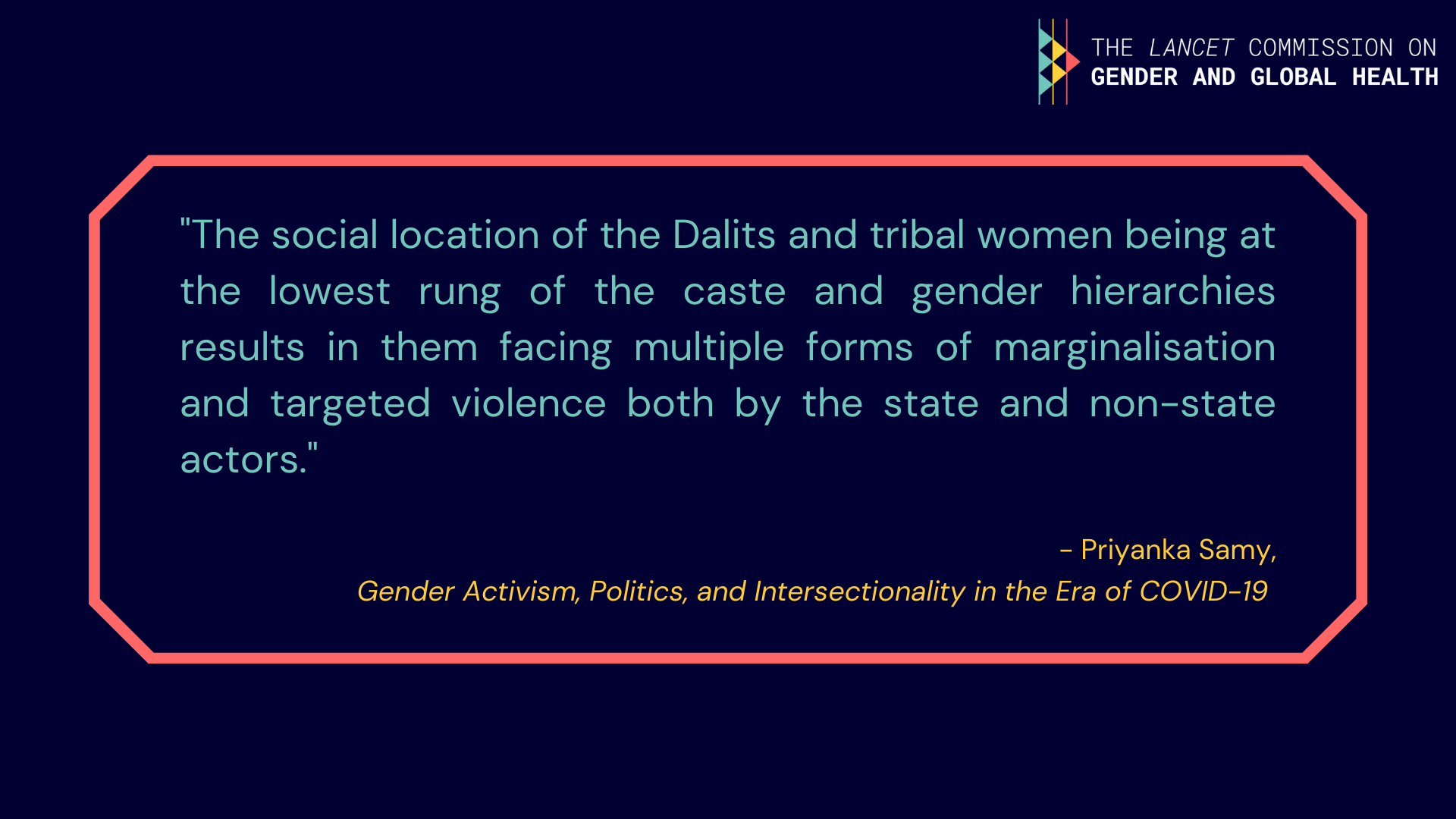 The impact of the pandemic on Indian women was immediate and devastating – while 73 million women were found to be living in conditions of extreme poverty in 2019, by 2020 it was estimated that the number had swelled to 110 million. In a call-back to Musolino’s earlier comments about women occupying low-paid and precarious roles, Samy commented that most workers in the unorganised and informal sector belong to Dalit and Adivasi communities and were disproportionately affected by the economic impacts of lockdown. With the pandemic threatening gainful employment and exacerbating unpaid care burdens, marginalised women, women with disabilities, and trans women found their labour market participation substantially affected.

Beyond the economic impacts, Samy identified a “shadow pandemic” in which guidelines to social distance coincided with “the highest ever” incidence rate of violence and sexual harassments against marginalised women, who were “further distanced, discriminated, and distressed with no access to essential services and rights whatsoever”. Many girls and women were also forced to drop out of school due to lack of access to online learning platforms and economic burdens; the National Federation of Dalit Women partnered with these young women and girls to strengthen collective agency and leadership skills during the pandemic, providing opportunities for them to advocate for pandemic relief such as dry rations and free shelter. These young women and girls swiftly started engaging with the heads of village councils, advocating with local authorities, and building social capital in communities where people “who were earlier dismissive of our very being now respect and look up to us as leaders”. In the context of increasing depoliticisation and government crackdowns on civil society, Samy’s final message was a reminder that “inequality is political and therefore our efforts to overcome inequity and inequality also have to be political”, as demonstrated by the young women and girls who were able to organise and challenge political forces to advocate for change. 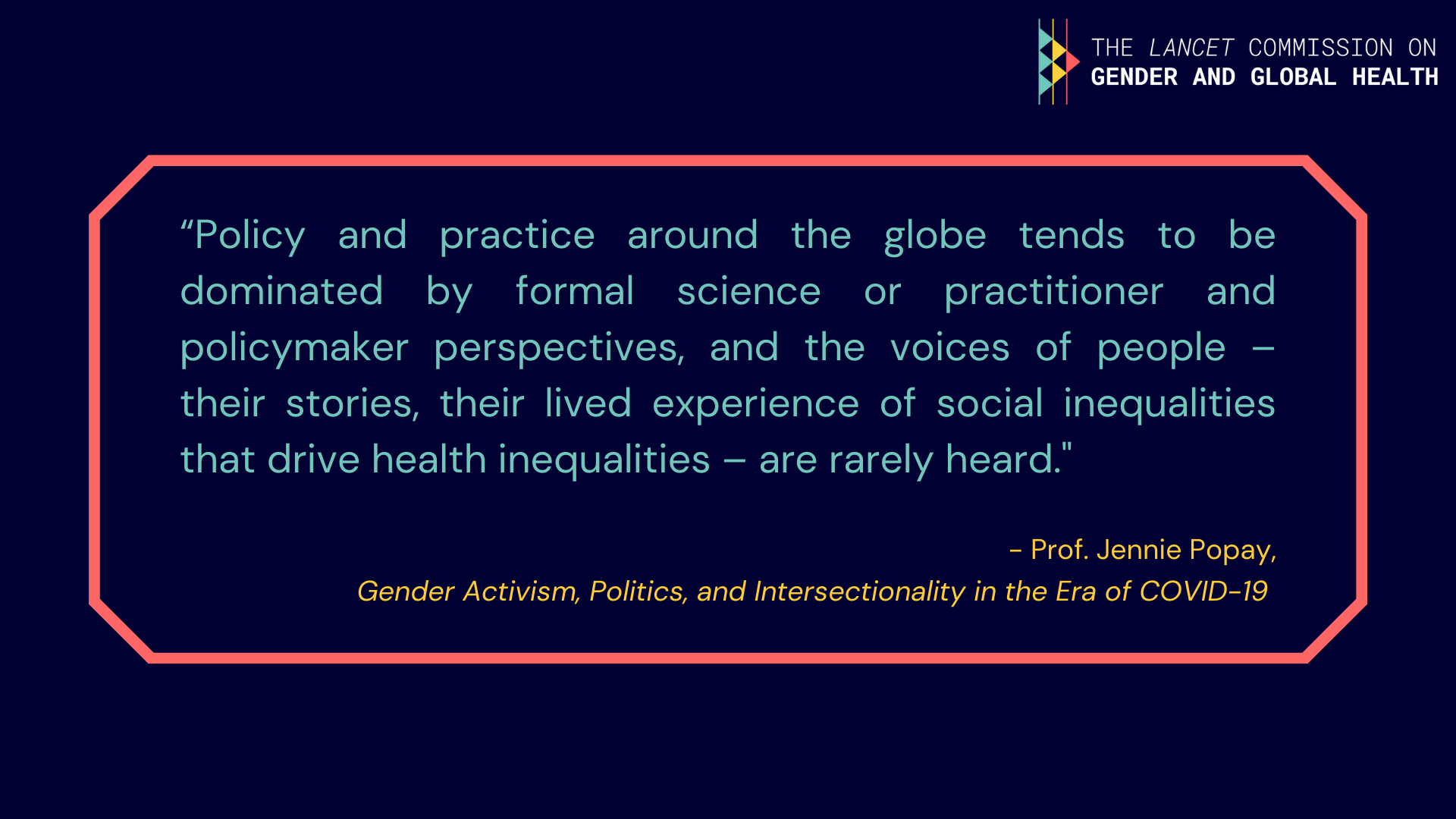 The intersection between lived experiences and policy change is one Popay also explores through the COVID-19 Other Front Line Global Alliance, an online platform which highlights the stories of “groups bearing the brunt of social injustice… and [brings] the storytellers into conversations about the impact of the pandemic”. The platform was established based on the observation that insufficient attention was being given to “lived experience narratives that are not generated through research” in conversations surrounding COVID-19. Inspired by Maya Angelou, Popay stressed that “all our stories help us to understand the nature of social problems and begin to think about appropriate solutions”, with stories featured on The Other Front Line supporting the narratives shared by the other two panellists, particularly on the “intensification of [women’s] roles as carers” as well as unsafe living and working conditions. Other stories, however, showed “what equity might look like” and detailed “deepening social relationships in families and communities”; while Popay acknowledged that positive stories do not negate any of the negative experiences shared to the platform, she pointed out the value in understanding that these different perspectives can coexist, showcasing strength and resistance in different ways.

While these stories hold potential for informing recovery plans, Popay noted that narratives are primarily used by civil society and rarely given value by policymakers and academics alike, who tend to view them as “simply anecdotal”. In closing, Popay acknowledged challenges such as digital inequalities and language barriers which might limit the stories shared on The Other Front Line and other such platforms, but called for a democratisation of these spaces to enable the identification of common interests “in as many ways as we can” so that storytellers do not merely experience social injustice, but are given a way to become part of the solution as well.

A range of audience questions were acknowledged, touching on gendered environmental risks, men’s COVID-19 health risks, and collective practice of care. Due to time constraints, the panel was only able to address the latter in detail.

Can collective practice of care and activisms demonstrate change by challenging the dominance of neoliberal concepts of self-care and individual responsibility?

Drawing on her years of experience and learnings from The Other Front Line, Popay agreed that such practices hold promise but cautioned against the risk of “narratives of community care and powerful reciprocity” leading to a shift in responsibility from the public sector to communities. Models of community-driven collective care are insufficiently resourced, and Popay warned that “the risk is that the next iteration of the welfare state post-pandemic in countries that did have good welfare provision will be this DIY model”. Moving forward, she emphasised the need for sufficient financial and material support from the public sector to continue resourcing these community-delivered models. 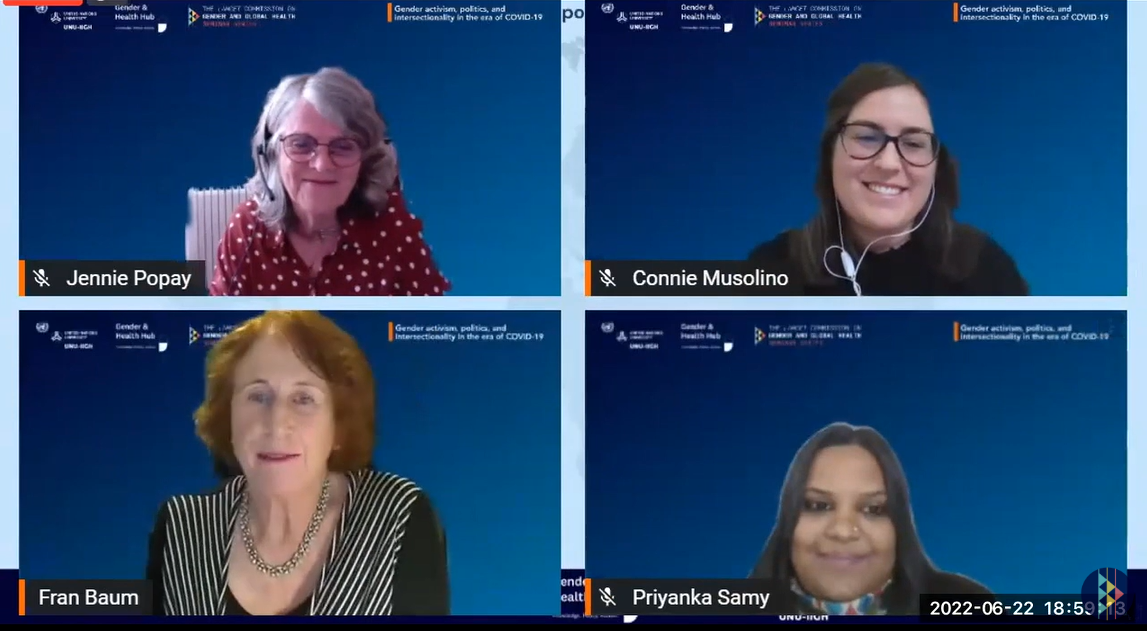 In closing, Baum thanked the panel for raising these important issues about intersection, not just for public debate but also for Commissioners to keep in mind as they work to produce a final report that is sensitive and inclusive for all.