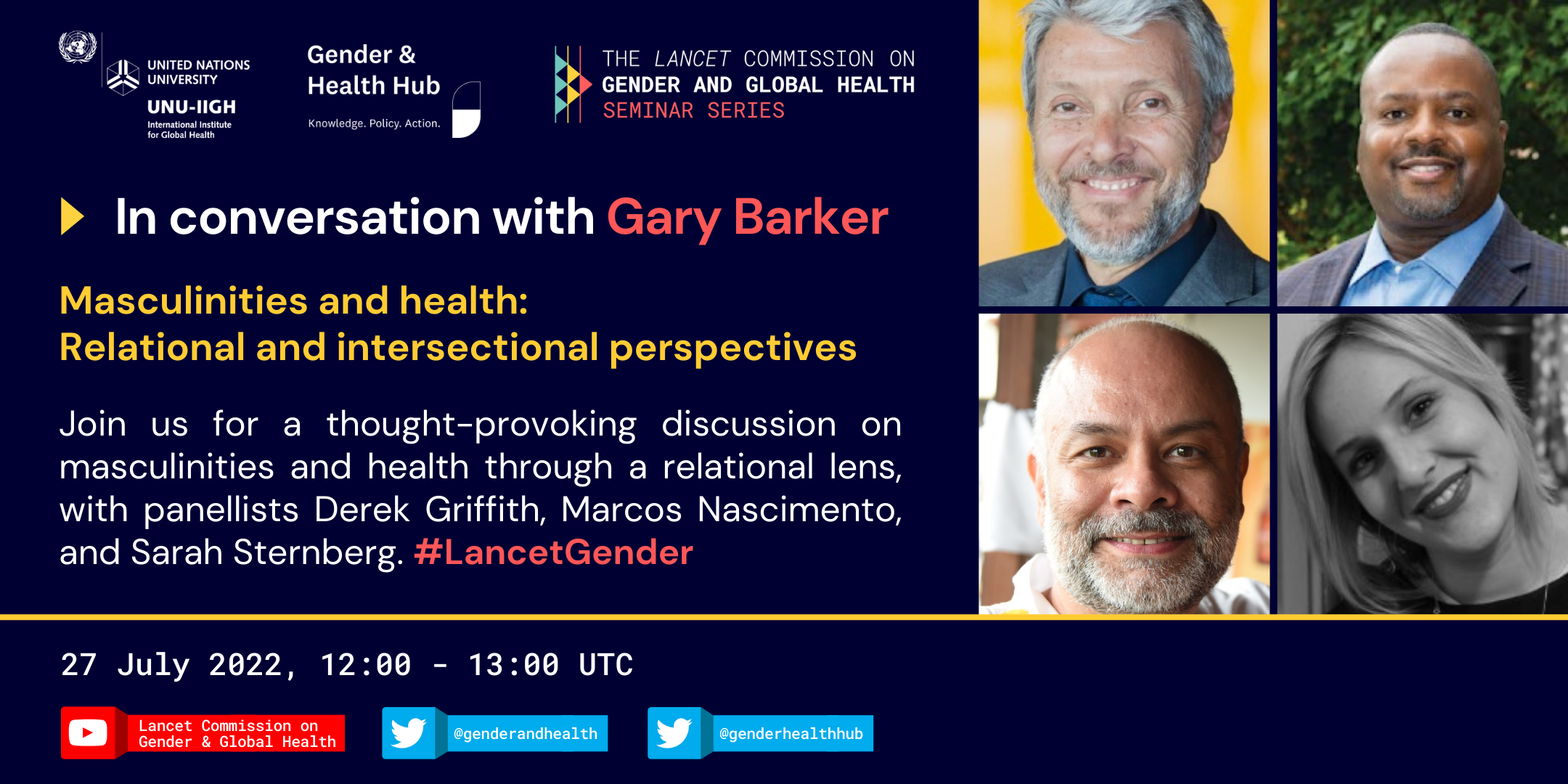 In Conversation With, the Lancet Commission on Gender and Global Health’s seminar series, returned with a fifth episode on July 27th. In Masculinities and health: Relational and intersectional perspectives, Commissioner Gary Barker emphasised the need for relational and intersectional perspectives to move the masculinities and health discourse beyond its current impasse. Barker, President and CEO of Equimundo: Center for Masculinities and Social Justice (formerly Promundo-US), was joined by three colleagues:

This webinar was co-convened with UNU-IIGH and the Gender & Health Hub. Commissioner Barker and speakers were joined by fellow Commissioners and livestream audiences on Twitter, YouTube, and Zoom. A recording of the hour-long webinar is publicly available on the Commission’s YouTube channel.

Barker opened by situating this discussion as one that considers “the broad social determinants that drive health outcomes for women, men, and non-binary individuals” through the lens of masculinities and strives to move beyond the scarcity lens that frequently pits men’s health against women’s health without due consideration for the ways in which both intersect and impact upon each other. 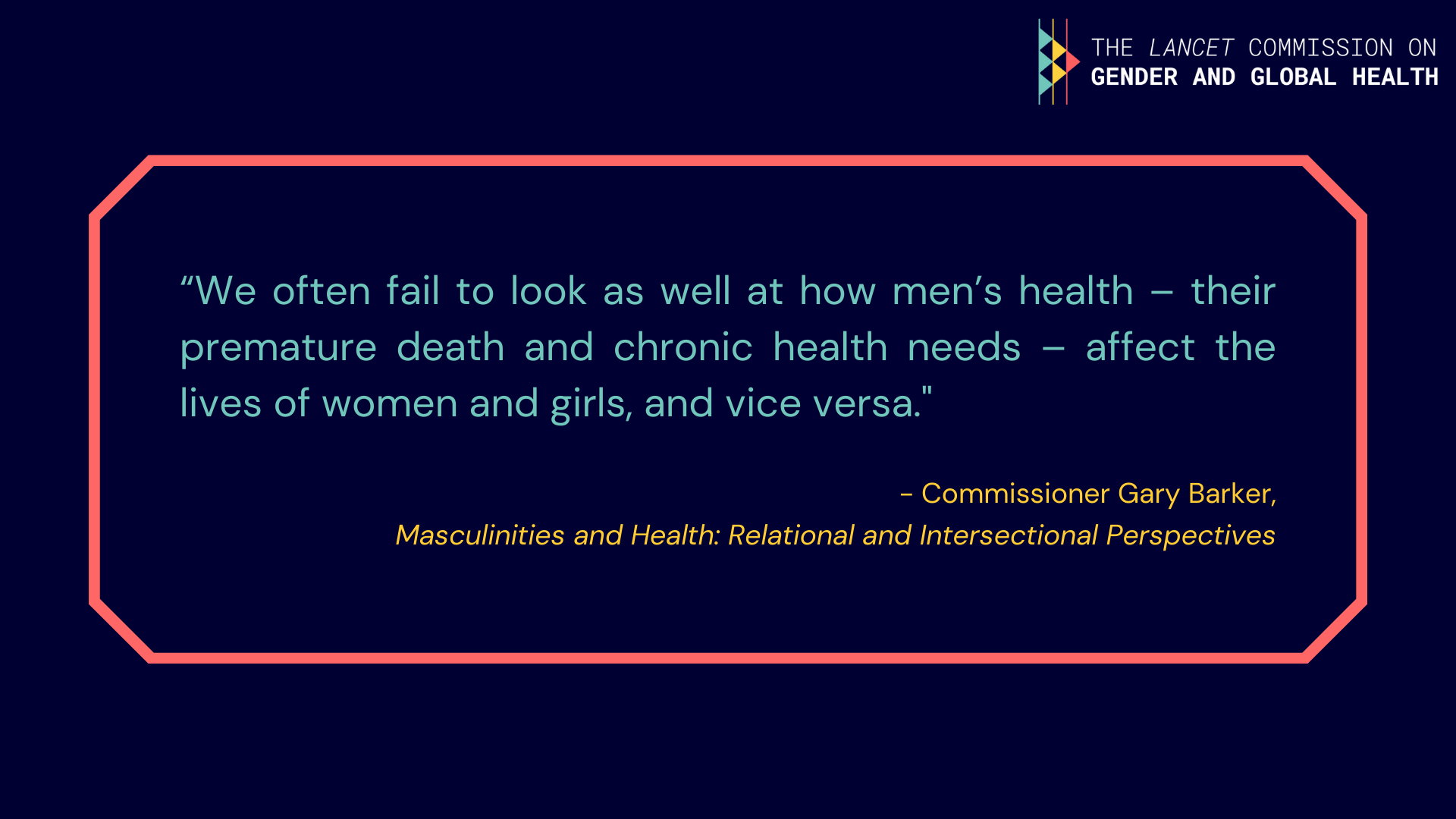 Critiquing the lack of relational approaches to men’s health, Barker noted that “it’s often women who pick up the pieces when sons or male partners or other men in the household either face chronic health conditions or premature death”. This lack of a “bigger picture” understanding also extends to the limited and superficial ways in which intersectionality has been applied to masculinities and health, with some analyses paying nominal attention to poverty as a key element but little else. Overall, this creates a “frozen picture of risk, vulnerability, and harm” that does not sufficiently interrogate the structural, systemic, and social forces at play, and fails to acknowledge the resilience and care shown, for example, by individual men or groups of men who act as activists and allies for their own health, and that of their households and communities.

With those limitations in mind, Barker invited his colleagues to a panel discussion that specifically sought to address the broader structural, systemic, and contextual factors that shape men’s health.

The three panellists drew from their rich and varied experiences within the broad area of masculinities and health to speak on the importance of intersectionality in the US context, the possibility of systemic change as illustrated by the Brazilian men’s health programme, and the value of narrative-based interventions that resonate with men and boys as applied by Movember in the UK. 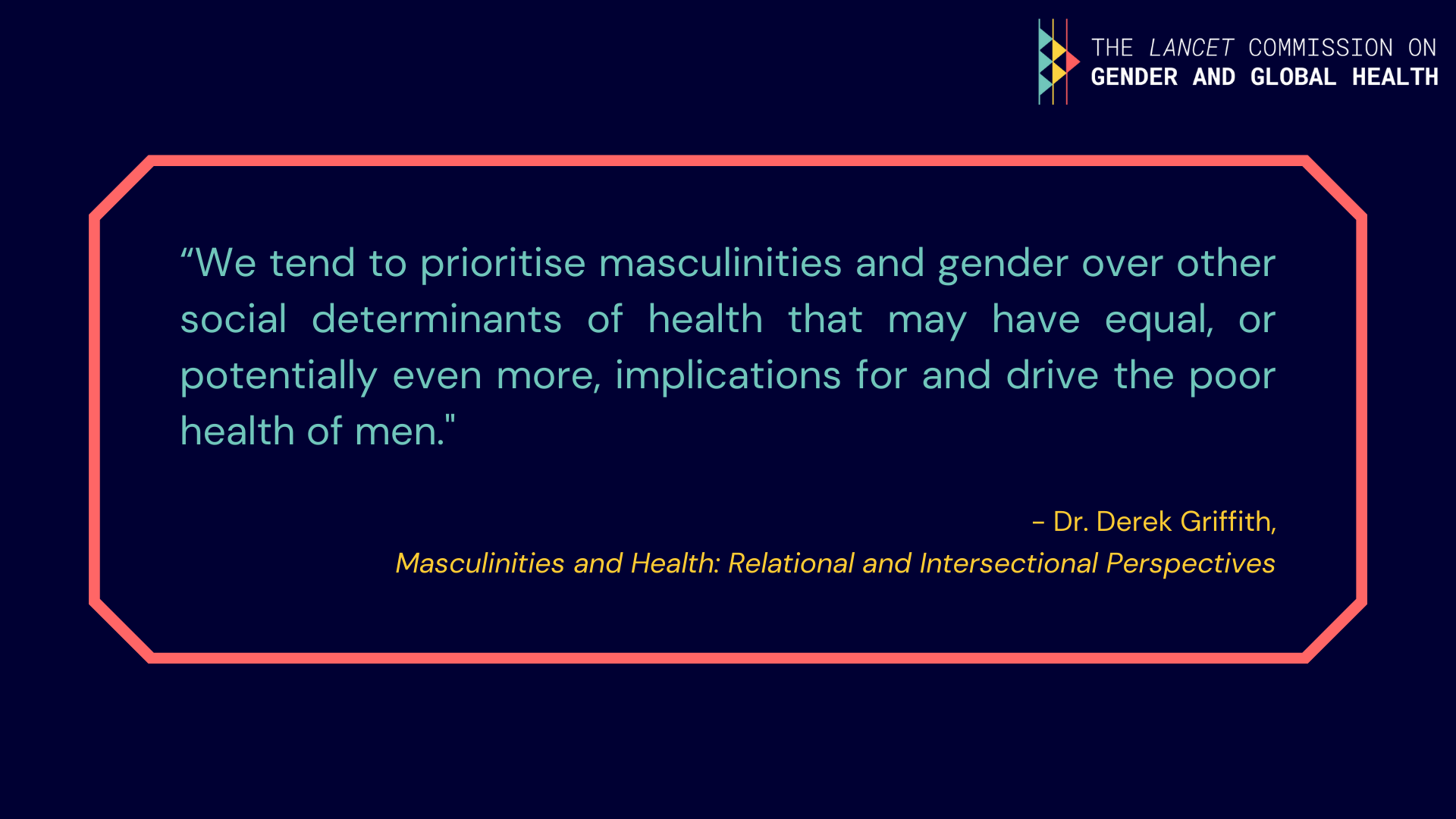 Drawing on his work with men of colour in both the US  context and other countries, Griffith highlighted how race, ethnicity, and sexual orientation can intersect with gender to shape health needs and outcomes through economic and political factors. This tied into a larger finding about men’s individual perspectives on health issues, and the fact that the deficit lens often associated with masculinities in health is not consistent with the ways that  many men think about their health. Instead, he found that men “tend to think about their age… and what it means to be an adult, in addition to what it means to be a man or presenting as male or living their lives as men” in relation to their health.

This mindset highlights the distinction between manhood and masculinities, and leads to a more relational approach for men in thinking about the impact they have on their families and communities. Griffith noted that men with this mindset tend to focus on their ability to positively affect others in their lives more than on their own physical and mental health. He also drew on Kimberlé Crenshaw’s work on intersectionality to comment on the need to “disrupt the tendency to see gender and race as separate” at three levels: the structural, the political, and the representational. These considerations inform the strength-based approach Griffith applies to his work on masculinities and health, which looks at policies and practices through the life course to identify, understand, and build on existing strengths and positivity in this area. Finally, he acknowledged that many countries and actors are “starting to recognise the importance of men’s health… frankly because men’s health tends to be a drain on the economies and health resources of a lot of our countries”.

Brazil was an example of this integration of and focus on men’s health within national health systems, launching its men’s health programme in 2009. Unfortunately, Nascimento noted that the programme has not been fully implemented in the thirteen years since, as Brazil is a geographically large and economically disparate country. However, he remains involved in ongoing efforts to improve and implement the programme, with a particular focus on fatherhood and care in his work. His work with colleagues has identified fatherhood “as a good entry point to bring men to the health services”, and the implementation of Brazil’s childbirth companion law and engagement of men throughout their partners’ pregnancies has greatly improved men’s access to rapid tests, SRHR services, and immunisation among others. 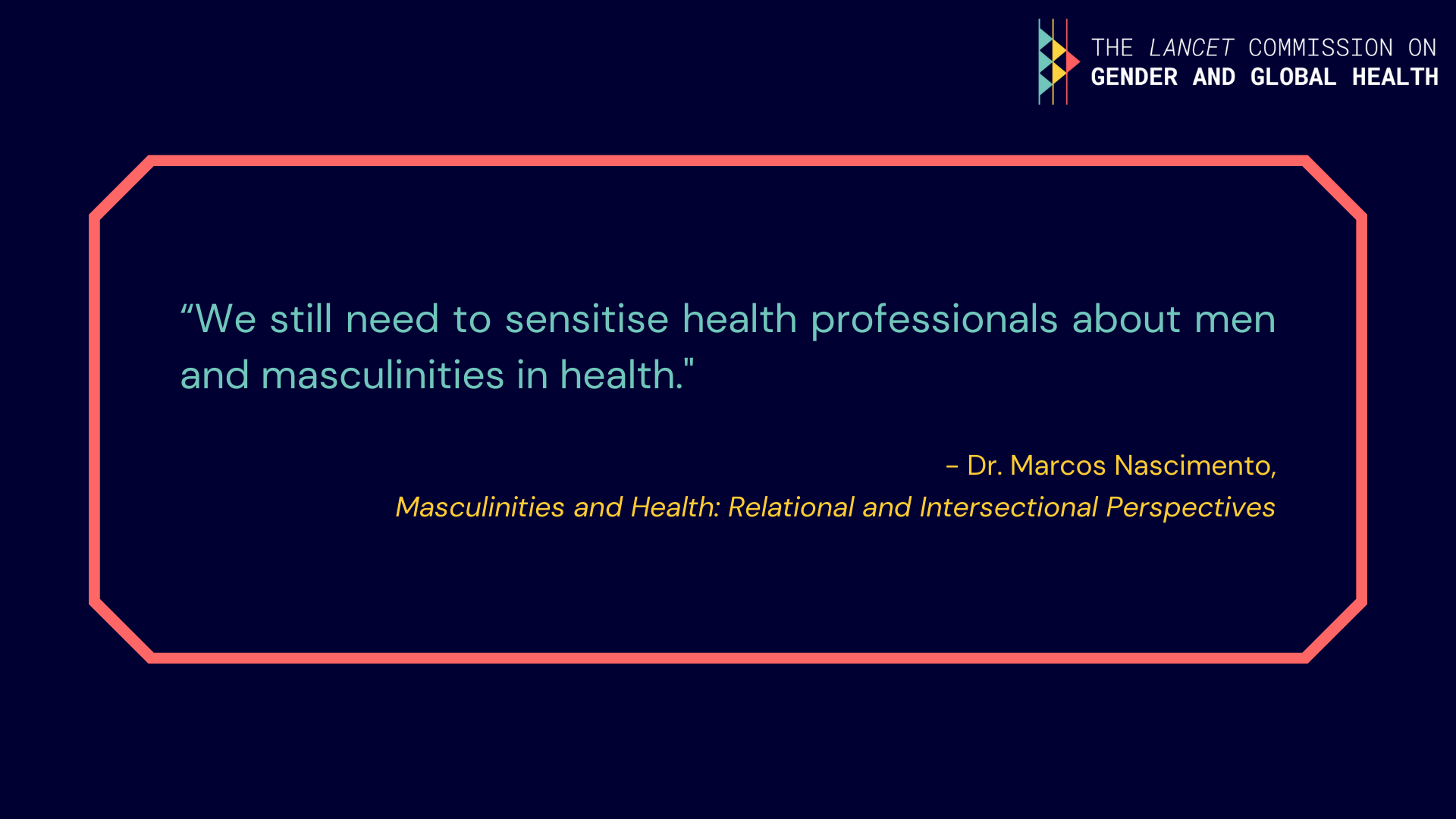 Returning to his initial point about the socioeconomic diversity among Brazil’s 5570 municipalities, which are responsible for implementing primary healthcare, Nascimento noted that more work is required to implement the national program at a local level, especially in terms of training healthcare providers to work with men. In this aspect, community health workers often set an example by making the effort to engage men beyond health settings. However, those working in both health services and research are gravely challenged at the moment by Brazil’s political climate, which Nascimento described as living “in an anti-gender offensive”. It is in this “conservative moment” that the need for and value of intersectionality becomes most apparent, as social movements and civil society organisations are tasked with an increasing amount of responsibility and ability to push forward agendas surrounding health programmes for LGBTQ+, Black, and other marginalised populations.

Representing one such organisation, Sternberg described Movember as a “positive disrupter” that has shaped change by leading creative and thoughtful discussions on men’s health. Initially established as a fundraising campaign some fifteen years ago in Australia, today Movember “has an array of programmatic activity [worldwide]… and is increasingly thinking about how to move into… health systems more broadly”. This growth has been enabled by Movember’s ability to “engage men in ways that feel fun” as part of a “human-centred design approach to centring men’s health”. A large component of this engagement hinges on Movember’s discovery that most men do not resonate with many of the contemporary framings around masculinities and health, and the consequent pivot to “trying to contextualise these things and… make them feel like they are part of life”. 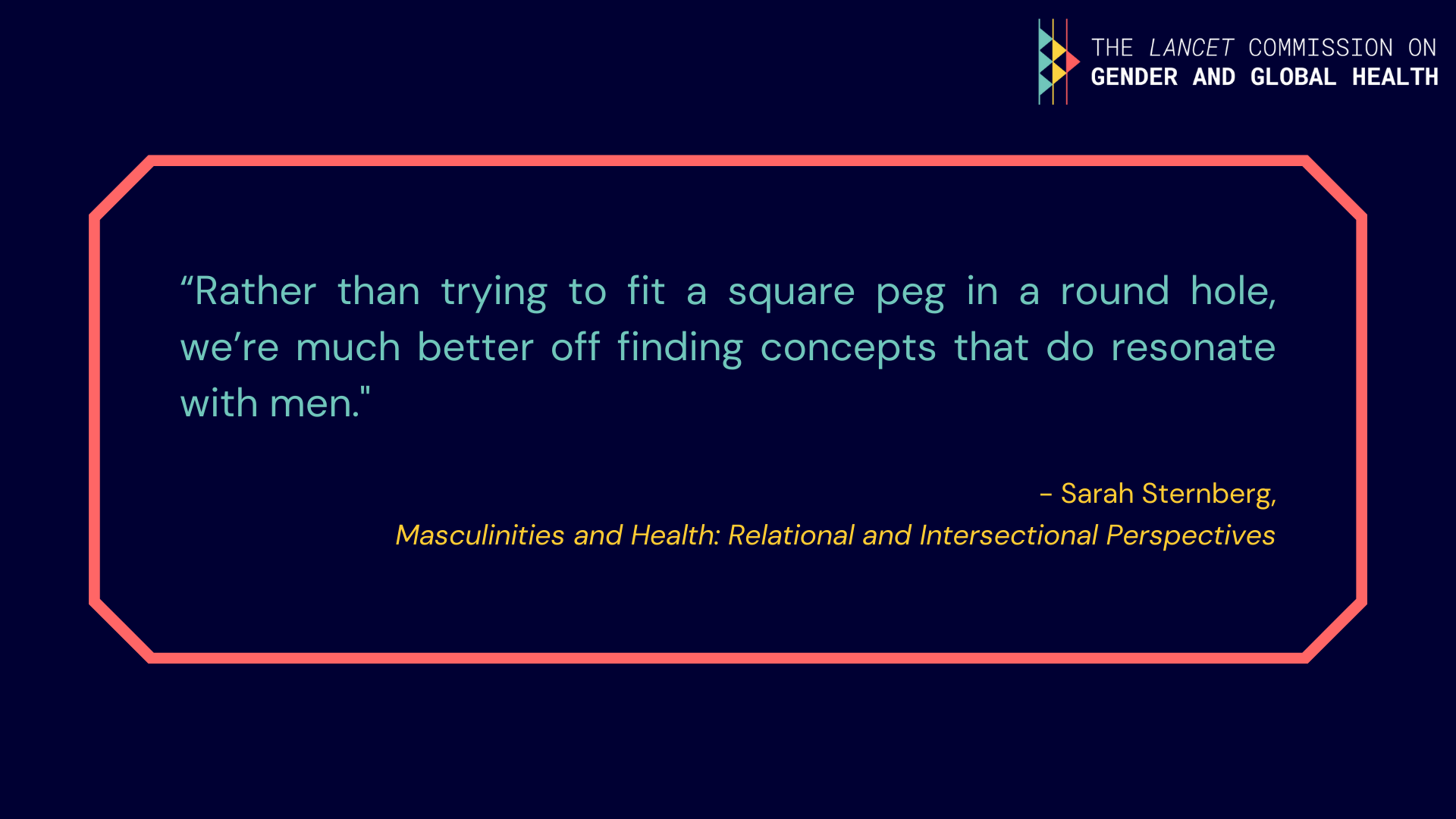 Echoing Nascimento’s comment that fatherhood is a tried-and-tested entry point for men into healthcare systems, Sternberg shared that Movember has also identified sports as “a really fruitful entry point” to both work with and challenge masculine norms regarding mental health and resilience. This is one of many examples of how Movember has experimented with framing and setting to challenge the broader sociocultural determinants of health for men, such as gender norms. Ultimately, Sternberg identified the key to this work being Movember’s ability to “situate ourselves in the lived realities of our audiences”, linking her remarks to the discussion’s larger theme about the importance of context-appropriate interventions.

Moderated by Barker, the brief Q&A session was able to address four questions from the audience on marginalised groups, risk factors, and strategies to engage men without side-lining women.

What recommendations would you offer around changing societal and cultural expectations around men of colour who are gay, pan, or trans in terms of their health needs? How to get the health system to respond, and what are the cultural shifts that need to happen?

Griffith began by establishing that the challenges described above are not with the populations themselves, but with systems and societies that fail to accept them. “We need to put our energy into changing the system, not changing the men we’re talking about,” he added, and suggested that trustworthiness and efficiency are two key areas for improvement. Nascimento agreed that systemic change is crucial, but also suggested that it could be beneficial to bring together key non-health players such as those working in education and social development to better assess and understand the health needs of populations.

What are the necessary approaches and strategies for external causes of death such as accidents, suicide, and violence? Are there any nuances beyond the numbers for men versus women?

In the Brazilian context, Nascimento stated that such external causes “provoke death in the male population much more than any disease or other factors”. While social class is crucial to analyses of external causes, he also stressed the need to approach this from a perspective that interrogates the relationship between masculinities and violence as the default conflict-management strategy for men.

Speaking on a more structural level, Griffith added that infrastructure can also be a significant contributing factor to these external causes of death. He stressed that while gender is an important part of the conversation on violence, failed economic opportunities and the resultant quality of life are also key factors to keep in mind. In terms of suicide as an external cause of death, Griffith suggested that a better understanding of gendered symptoms of depression is needed.

Cancer follows heart disease as the second leading cause of death among men in the US among other countries. What do we need to do to address this?

Drawing on Movember’s work, Sternberg stated that while early care is the key to preventing death and mitigating the impacts of cancer, masculine norms typically prevent men from admitting vulnerability and seeking help. The rise of telehealth, driven by COVID-19 restrictions, further exacerbated this by adding an element of distance between men and healthcare providers.

Griffith suggested that rather than looking at cancer and heart disease as two distinct causes of illness and death, perhaps more insight can be gained by analysing the two together to understand “what it is over the life course that puts [men aged 45 and older] at risk for both”.

Are there any strategies for engaging men in prenatal care that pay equal attention to supporting women’s decision-making over their own sexual and reproductive health and bodily autonomy?

Wrapping up the Q&A session, Barker stressed that the key to this challenge is not pitting men’s needs over the needs of women and other individuals, and that health services for men cannot come at the expense of women. Referring to his work for the Brazilian men’s health programme, Nascimento added that while Brazil still has a long way to go in addressing this, next steps must be guided by an understanding of gender equality which brings together and values all perspectives involved.

Final thoughts and moving forward: A relational and intersectional approach

In conclusion, Barker summed up the panellists’ remarks to call for a more nuanced application of intersectionality to masculinities and health, underscored the need for more consideration of gendered norms and lived experiences, and remarked on the challenging nature of this work particularly in the context of rising political backlash against merely speaking about gender in some contexts.

Finally, he urged those working on masculinities and health to adopt “this relational, intersectional life-cycle approach” as the way forward, and thanked the panellists for their contributions to crucial work that will inform the Commission’s approach to this topic.